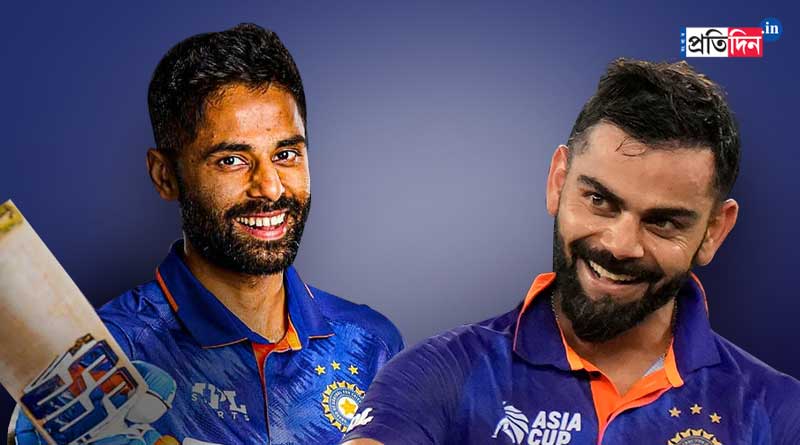 News Daily Digital Desk: Virat Kohli is in great form in the T-20 World Cup. This time King Kohli also set a world record. Virat Kohli scored a brilliant half century against Bangladesh on Wednesday. At the same time, he has set the precedent of scoring the most runs in the T20 World Cup by topping Mahela Jayawardene. He scored 1065 runs in only 25 matches in the World Cup. On the same day, Indian batsman Suryakumar Yadav became number one in T20 ranking. Surya became the top batsman by displacing Pakistan’s Mohammad Rizwan.

Virat became the second batsman in the world to score 1000 runs before the start of the India vs Bangladesh match. Virat was in great form from the start in Adelaide on Wednesday. India was in trouble after Rohit Sharma was dismissed. At that time, Virat came to the crease and took control of the Indian batting. Virat set a new world record during the seventh over of the Indian innings. He set a world record with a single off the ball of Taskin Ahmed. King Kohli topped Sri Lankan batsman Mahela Jayawardene to become the highest run-getter in T20 World Cup.

After being in bad form for quite some time, Virat made a comeback from the Asia Cup. From scoring a century against Afghanistan to four half-centuries in the current World Cup – King Kohli is back to his glory again. Virat has crossed fifty runs in every match except South Africa in T20 World Cup. Kohli has scored the highest runs in the current World Cup. He played an unbeaten innings of 64 runs off 44 balls against Bangladesh

Suryakumar Yadav climbed to number one in the ICC rankings released on Wednesday. He scored a half-century against the Netherlands. Despite the batting disaster against South Africa, Surya played a fighting innings of 68 runs. As a result of his extraordinary batting, he climbed two steps in the ranking. Surya dropped to number three in the latest ICC rankings. He came to the top of the list of batsmen by playing fast innings in two consecutive matches.