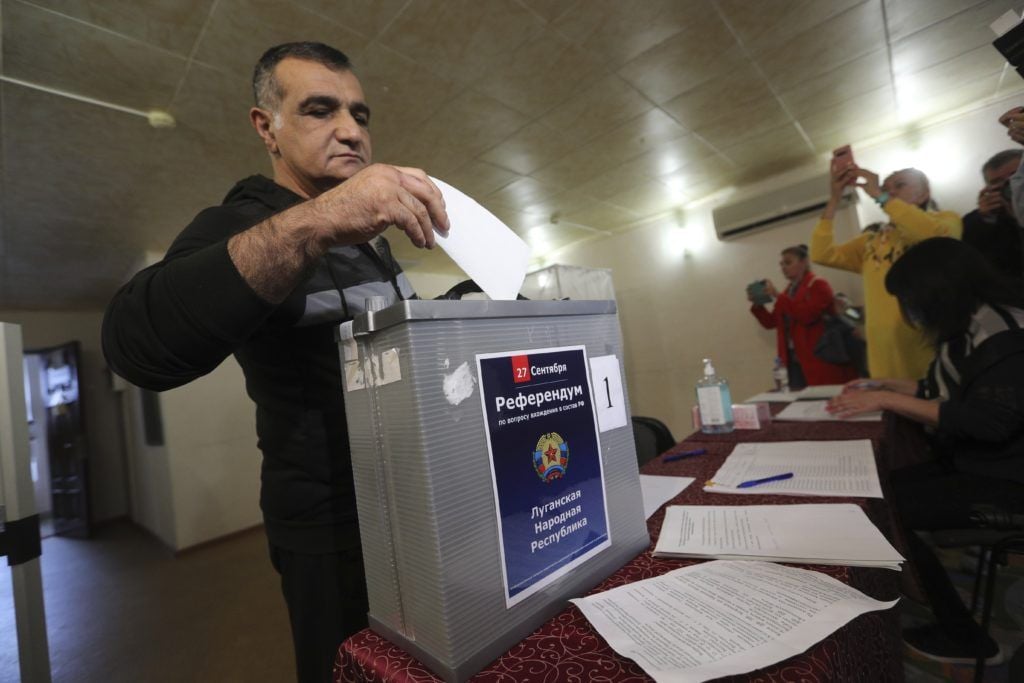 Voting has begun in a so-called referendum for Ukraine to be part of Russia in the Russian-occupied territories after officials from Ukraine and the United Nations reported evidence of war crimes during the nearly seven-month war in the country.

The Kremlin-orchestrated referendum, widely depicted by Ukraine and the West as a pretense of no legal force, is seen as a step towards annexation of territories by Russia.

The votes are being held in Luhansk, Kherson and partly in the Russian-controlled Zaporizhzhya and Donetsk regions.

The governor of the Kharkiv region, which was mostly held by Russian forces before a Ukrainian counter-offensive this month, said on Friday that 436 bodies had been retrieved from a mass burial site in the eastern city of Izium, 30 of them with visible signs. are with. Why torture?

A team of experts appointed by the UN Human Rights Council on Friday presented evidence of crimes including beatings, electric shocks and forced nudity in Russian detention facilities, as well as executions in the regions of Kyiv, Chernihiv, Kharkiv and Sumy.

But the commission’s chairman did not specify who or which side of the war committed most of the alleged crimes.

The referendum vote follows Russian President Vladimir Putin’s order for a partial mobilization of reservists, which could add some 300,000 Russian troops to the fighting. Voting will continue for five days till Tuesday.

The referendum, which asks residents whether they want their regions to become part of Russia, is sure to go the way of Moscow. This would give Russia an excuse to claim that the Ukrainian military’s attempts to regain control are attacks on Russia itself, dramatically escalating the war.

As votes were being held in the occupied territories, Russian social media sites were filled with dramatic scenes of tearful families bid farewell to men departing military mobilization centers.

Election officials will bring ballots to people’s homes and set up temporary polling stations near residential buildings during the first four days of the referendum, according to Russian-established officials in the occupied territories, citing security reasons. Tuesday will be the only day that voters will be invited for regular voting.

Voting also began in Russia, where refugees from occupied territories can cast their votes.

Denis Pushilin, the separatist leader of the Moscow-backed authorities in the Donetsk region, called the referendum “a historic milestone” on Friday.

Find out more about the UK government’s response: https://t.co/Bot9jAVNWg

Vyacheslav Volodin, speaker of the State Duma, the lower house of Russia’s parliament, said in an online statement on Friday, addressing the occupied territories: “If you decide to become part of the Russian Federation – we will support you.”

Valentina Matvienko, the Speaker of Russia’s Upper Parliament House, said residents of the occupied territories were voting “for life or death” in the referendum.

Ukrainian President Volodymyr Zelensky only briefly referred to the “Sham referendum” in his nightly address, in which he switched from speaking in Ukrainian directly to Russian in telling Russian citizens that they would be “thrown to their death”. Used to be”.

“You are already a participant in all these crimes, murders and torture of Ukrainians,” he said. “Because you were silent. Because you are silent. And now it’s time for you to choose.”

“For men in Russia, it is a choice to die or live, to become crippled, or to maintain health. For women in Russia, the choice is to lose their husbands, sons, grandchildren forever, or still have them. To try to save from death, from war, from a person.”

The vote takes place against the backdrop of incessant fighting in Ukraine, in which Russian and Ukrainian armies exchanged fire as both sides refused to accede to the ground.

Ukraine’s presidential office said Friday that at least 10 civilians were killed and 39 others were injured in Russian shelling in nine Ukrainian territories in the past 24 hours.

It said fighting continued in Russian-occupied southern Kherson despite the turnout, while Ukrainian army troops fought 280 attacks on Russian command posts, munitions depots and weapons in the region.