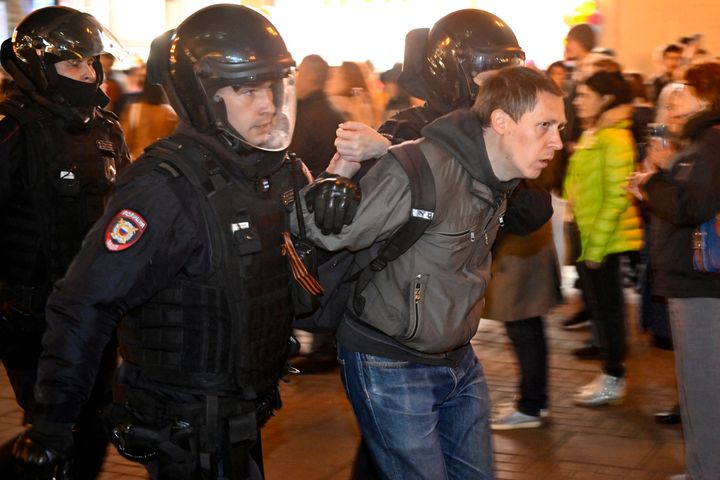 Rare protests broke out across the country, within hours of President Vladimir Putin ordering a partial mobilization of the reservoirs on Wednesday, leading to nearly 1,200 arrests.

Shortly after Putin’s address, Russian media reported an increase in demand for plane tickets abroad as some draft-age men headed for the limit.

Hundreds of people gathered on Central Stary Arbat Street amid heavy police presence in the capital Moscow. In videos published on social media, protesters can be seen chanting “no war”, “send Putin into the trenches” and “let our children live”.

Putin’s risky order comes after a humiliating setback for his troops nearly seven months after he invaded Ukraine.

The first such call-up in decades raised tensions with Ukraine’s Western supporters, who took it as weakness and frustration.

Officials said the total number of reservists to be called could be up to 300,000.

Despite Russia’s tough laws against criticism of the military and war, angry protesters from mobilization overcame their fear of arrest to stage protests in cities across the country.

According to the independent Russian human rights group OVD-Info, about 1,200 Russians were arrested in anti-war demonstrations in cities including Moscow and St.

As protest calls circulated online, the Moscow prosecutor’s office warned that conducting or participating in such actions could result in up to 15 years in prison.

How many people took to Twitter to retort “No war!” Will be brave enough to shout. As they are being chased away by four Russian policemen? Not many would be my guess. https://t.co/8bSpHWQRbz

Today protests against mobilization are taking place in several Russian cities, most of which have led to small-scale arrests. The woman’s sign reads, ‘No to Mobilization’ pic.twitter.com/EbytXN2OQF

The Associated Press news agency saw at least a dozen arrests in the first 15 minutes of nighttime protests in the capital.

“I am not afraid of anything. The most valuable thing they can take from us is the lives of our children. I will not give them my child’s life,” said one Muscovite, who declined to be named.

Asked whether protesting would help, he said: “It will be of no use, but it is my civic duty to express my stand. Not for war!”

In Yekaterinburg, Russia’s fourth-largest city, police put some of the 40 protesters detained at an anti-war rally on buses. A woman in a wheelchair shouted, referring to the Russian president: “The bald-headed ‘nut job’. He’ll bomb us, and we’re all still protecting him. I’ve said enough.”