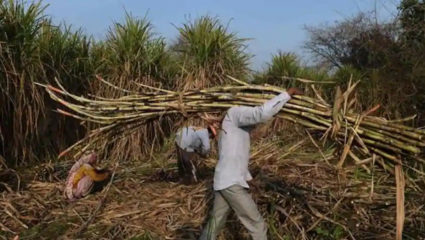 Lucknow: The government’s goal is to double the income of farmers. There are two basic mantras to achieve this goal. The first is the maximum production with the lowest cost and the second is the fair value of the production. Technique has the most important role in maximum production in minimum cost.

Considering the number of sugarcane farmers in Uttar Pradesh, it becomes necessary to reduce the cost of sugarcane cultivation and pay the cane price in time. The government is doing this by increasing the per quintal price of sugarcane and making record sugarcane payments. Now the emphasis of the government is encouraging co-cropping with sugarcane along with new farming techniques for higher yield at minimum cost. In this sequence, the state government had increased the sugarcane support price for the last crushing season according to the quality of sugarcane.

use of new technology in agriculture

In order to increase the yield by using new technology in sugarcane cultivation, the sugarcane department has started a new scheme for sugarcane cultivation named “Panchamrut Yojana”. This includes modern methods of sowing sugarcane, trench, tree management, drip irrigation, mulching and co-cropping. Because of this, it has been named Panchamrit. Everything in this has its benefits. For example, drip irrigation will reduce water consumption by 50 to 60 percent. Maintaining moisture as per requirement will ensure good growth of plants. With the use of mulching leaves, the problem of pollution caused by burning and burning them will be solved. Over time, these leaves will rot and make the field naturally fertile in the form of manure.

For the establishment of model model plots, the time of autumn sowing is important and under this sowing, a total of 2,028 farmers in the state are initially being selected and the target of ideal model plot of sugarcane cultivation is being set. The area of ​​this plot will be 0.5 hectare. The purpose of such demonstrations is that the rest of the farmers of the area also see it and adopt it. That is why such demonstrations will be held in every region of the state. District wise targets have been set for coordinated methods and methods under Panchamrut Yojana.

Farmers will be honored

Sugarcane farmers are being encouraged to adopt the Panchamrita scheme to promote co-cropping of sugarcane and trench method. Farmers are also adopting this scheme. In order to make the farmers sowing sugarcane in the autumn, from the District Sugarcane Officer to other officers of the Sugarcane Department, going from village to village, the farmers are making them aware about this method. It is also being told that the department will also honor some farmers who get better production from this method.

Harassment by husband- Talaq fraud allegation: Former deputy mayor who made a video and complained to Prime Minister Modi, tried to commit suicide |...

This war is Russia against NATO IV news

Incident of smoking in the plane: Dinamalar ordered an inquiry by the minister IV News

Five gates of Narmada dam were opened and 1.45 lakh cusecs of water was released IV news

When the country became independent, one tolo of gold was available for 89 rupees, know the prices of other items When country became...