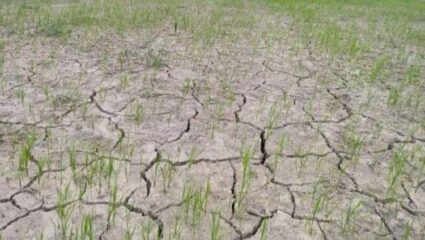 Salai KhurdBawanthadi project is full of rain this year. The water logging in this reservoir is sufficient. Its benefit proves beneficial for the irrigated land of farmers of Maharashtra and Madhya Pradesh. The International Bawanthadi Dam built on the border of Maharashtra and Madhya Pradesh has become beneficial for the farmers. Farmers say that due to not releasing water in the canals soon, sowing and transplanting of paddy is not being done. The farmer is very worried about the demand for water. In view of the above problem, the farmers have soon submitted an advertisement for the release of water in the canals in the Bawanthadi office.

The farmers of Salai Khurd, Sihri, Tanga, Usra, Katebamhani and Paldongri of Mohari tehsil have demanded to be given water from the reservoir as soon as possible to transplant the paddy crop and the seedlings of most of the farmers are on the verge of drying up. Is. In the area, more paddy crop has been planted in the area irrigated by the Bawanthadi reservoir. But due to lack of water, the paddy crop is now slowly drying up. The situation is that there have also been cracks in agriculture. This is happening because it rained heavily in the beginning but since last week the rain has turned its back. In such a situation, the farmer families are demanding to get the farmers out of the crisis by leaving the water of the reservoir. If water is not available soon, the farmers will suffer a lot.

The farmer is worried that if there is no good rain or the water of the reservoir is not released soon and if there is a delay, then the crop will be affected and the crop will be affected. Paddy’s nursery got spoiled as soon as sowing was done due to excessive rain, then after sowing again after taking loan, the missing rain has increased the concern of the farmers. The farmers who had sown in the first of July. Their crops are drying up. The farmers who have not sown till now are also worried. They say that if the water of Bawanthadi reservoir is not released, then their fields will be left empty if they do not get time for sowing.

The government will have a burden of Rs.219 crore to meet the demands of health workers IV news

The knee operation was done with a big cut and the pain is very much. Even after the successful operation, Shoaib Akhtar was...

Vajpayee’s statue got permission as soon as the government changed; The unveiling will be held in Kandivli – Marathi News | Atal...

Ajker Rashifal Bengali, 12 August 2022: The natives of this zodiac sign will get huge profits in investment! IV news

Bad news for the people: increase in electricity price by 10 rupees per unit IV News