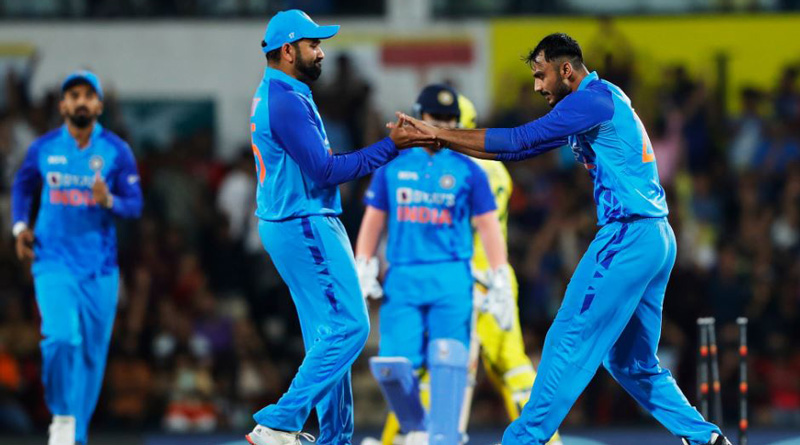 News Daily Digital Desk: In the first T20 match of the series held in Mohali, India lost by 208 runs. The bowlers of Rohit Sharma’s team bowled poorly. Bhuvneshwar Kumar was heavily criticized. His wife Nupur took a dig at the critics by tweeting. In Nagpur, however, India started to play the second T20 match of the series with Bhubi out of the field. Rishabh Panth was taken in the team instead of Bhubi. On the other hand, Jasprit Bumrah was kept in the first XI to strengthen the bowling department. India avenged the Mohali loss at Nagpur. India defeated Australia by 6 wickets on Friday to level the three-match T20I series. Rohit Sharma shines with the bat.

The outfield was wet due to the rain of the past few days. It was not possible to start the game at the specified time because the field was not dry. With the efforts of the field staff, the field is finally fit for play. By then, however, almost two hours had passed. As a result, the 20-over match became an 8-over match.

There is nothing to be gained from an 8 over match. India captain Rohit Sharma also said that during the toss. Rohit won the toss and sent Australia to bat first. Ajira made 90 for five in 8 overs. Aaron Finch and Cameron Green came in to open for Australia. In the previous match, Cameron Green batted aggressively from the start. On this day, however, Green was run out before it became dangerous. Virat Kohli’s throw reached Akshar Patel and Green was run out (5). Before that, however, Kohli caught Green.

Dangerous Glenn Maxwell (0) bowled by Akshar Patel. Whenever Rohit brought Akshar Patel to bowl in the first T20I, he took wickets. Left-handed spinner Akshar also struck on this day. Tim David also (2) is a victim of Akshar Patel. Aaron Finch and Matthew Wade contributed behind Australia’s 90 runs in 8 overs. Bumrah bowled Finch (31). On the other hand, Matthew Wade remained unbeaten on 43 runs. Among the Indian bowlers, Akshar Patel took 2 wickets and Bumrah took 1 wicket. On this day, however, Bumrah was dropped instead of Umesh Yadav. And Bhuvneshwar Kumar was played by Rishabh Pant.

Chasing Ajid’s 90 runs, Rohit Sharma played an innings of marmukhi runs. Lokesh Rahul, however, scored 10 runs and was bowled by a jumper. Virat Kohli (11) stumbles on a jumper delivery. Suryakumar Yadav also called jumper without opening the account. On the one hand, Rohit created pressure, but India quickly lost two wickets. As a result, Team India began to feel temporary pressure. But captain Rohit Sharma survived. Despite looking sluggish at the start, Rohit shined as the game progressed. The wickets of Kohli, Suryakumar, Hardik Pandya were gone but Rohit (46*) stayed on the wicket and won the match for India. The India-Australia three-match series is now 1-1.