IAS Statement On Condoms | Bihar: Controversial statement of women IAS – If girls are given free sanitary pads, then condoms will also have to be given ‘free’ Watch video IV News 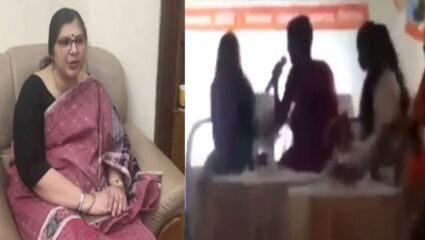 Patna: Chief Minister Nitish Kumar on Thursday said that the matter is being looked into and action has been taken after a video went viral on the question of free sanitary pads for schoolgirls. Will go On being asked by a girl student involved in the “Sashakt Beti Samridhi Bihar” program organized by the Women and Child Development Corporation under UNICEF Save the Children and Plan International on Wednesday in Patna, what kind of dress and scholarship are there for girls in government schools? On this, Kaur asked if there was any end to this demand.

Kaur, a Bihar cadre officer of the Indian Administrative Service, said, “You can give a sanitary pad of 20-30 rupees. Can give jeans pants tomorrow. Why can’t you give beautiful shoes the day after tomorrow. They cannot do it to the nurses, and in the end when it comes to family planning, then detention will also have to be given for free, isn’t it? When the student was told that whatever is in the interest of the government, she should be given, Kaur said, “What do you need to take from the government. Bless yourself so much.”

He said that the thinking that the government cannot give us 20-30 rupees. this is wrong. The government is giving a lot.” When the girl student said that when she comes to vote for us, it is not at that time… Don’t vote. Go to Pakistan.” To this the student said, “If I am in India, why should I go to Pakistan.” Kaur asked the student whether you vote for money or do you give it in lieu of convenience. Tell.”

Watch: In Bihar, a student asked- ‘Will get a sanitary pad…’ then the woman IAS Harjot Kaur said- ‘Can you give condom too?’#ViralVideo #SanitaryPad #Condom #HarjotKaurhttps://t.co/8OKDDTKyO8

When Chief Minister Nitish Kumar was asked about Kaur’s statement, she said, “Ek ek ki koi kar rahe rahe hai. If there is any truth whatsoever, action will be taken.” Jan Adhikar Party founder and former parliamentarian Rajesh Rajan alias Pappu Yadav tweeted and told Bihar Chief Minister Nitish Kumar, “Nitish ji, a senior woman officer of the government is infected with the BJP-Sangh infection. She threatens to send the daughters of Bihar to Pakistan if she demands her rights. Appropriate administrative treatment is necessary to free them from mental infection.” (agency)