‘I gave birth in the bath alone. it was easy’ IV News 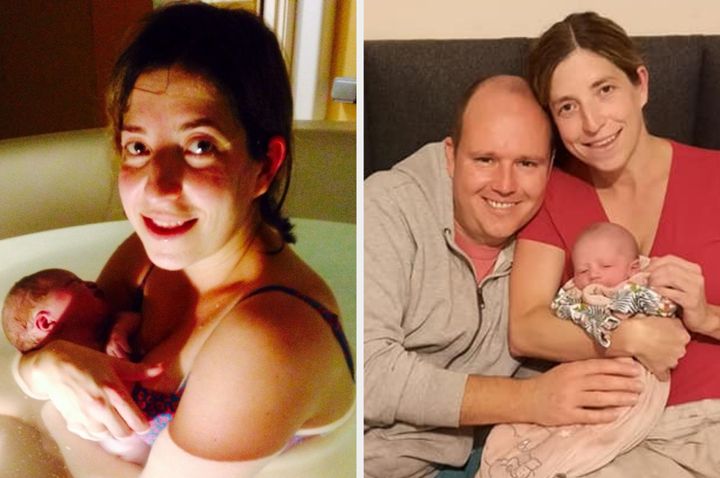 In My Story, readers share their unique, life-changing experiences. Today, we hear from mum-of-three, Corinne Card, 41, from Brighton.

By my due date, it was weird where I thought: What if, for some reason, I’m on my own when I give birth? What if no one can help me and I am completely on my own, how will I give birth to a baby? And in my mind I literally planned how I would do it. How do I pick up the baby since he was born so that his head doesn’t hit? I was trying to imagine it to make myself feel better, not really thinking it would happen…

It was October 14, 2020 – in the middle of the pandemic – and I was booked to go on a Zoom call with several customers. I told my husband John that I was having contractions and that he would have to call himself. I thought they were Braxton Hicks contractions and I really didn’t want to employ them.

At 3 pm, I had to pick up my daughter Zoe from school. I was still having these small contractions, but I didn’t think it was a big deal. Then, as I was walking up the hill to go back home with my daughter, I had to stop and breathe properly. They were getting stronger.

When we got back I called the hospital because so far they felt like Suitable contraction. The midwife asked how far and all that information was, and said: “Don’t worry, it’s not really happening yet. If it hurts, take a couple of paracetamols and take a shower.” So I did.

Originally I had planned a water berth at home. I bought a large birth pool that we were going to pump. But about a week before the due date, they measured my bulge and said it’s a little smaller than it should be, so it’s best to go to the hospital for the birth. I was disappointed, but wanted the one that was the safest.

I think my contractions started getting more powerful when my husband was still on a Zoom call. I got out of the shower and called the midwife again, who said: “No, no, don’t worry, it’s still not happening. You’re too far.”

Back in the water, it all seemed less painful, but the contractions continued to intensify. I told John about the intensity after I ended my call – it felt like it was getting quite dramatic with the pain – and he called the hospital who put me on the phone to listen to me during contractions. I had taken a bath for about an hour but he still said: “No, we don’t recommend you come yet because it will be a long time before the baby is born.”

I think it was around 4.30, although I’m not sure exactly what time I didn’t want to put my phone in there, the bathroom was so steamy.

My plan, when it arrived, was to stay in the shower until we needed to leave the house to go to the hospital. The midwives had asked if my water had broken, and they didn’t. From their point of view, I think they were making the right call with all the information we were providing.

What happened next was that I put my hand down to see how thin I was and felt that I could feel what seemed to be a bit of a baby’s head.

I said to John: “I think the head is there!” And I was screaming so much that at this moment a neighbor came to the window to ask: “What is happening here?” John shouted back: “She’s having a baby!” When she called the hospital again, the midwife told her to call the paramedics, which she did.

From my other births, I remembered that the baby shouldn’t be in the birth canal for too long, so I got on my hands and knees in the shower, waiting for a contraction and a small push and the head just popped out. . Or what I thought was the head…

It was head-shaped, but it was white and had purple veins around it. I realized later that the baby was still in its amniotic sac.

It was like an out-of-body experience, it was all very strange. I shouted: “The head is out.” And John said to the paramedics: “The head is out!” He was still in the kitchen. He did not want to bring the phone to the bathroom in case the call was cut.

“And there he was, and he was crying, and I was all alone.”

I waited for another contraction, another small push and the baby came out – and as I imagined it, months before, I quickly put out my hands and grabbed the baby I was now. I didn’t let him stay under water. And there he was, and he was crying, and I was all alone.

That final push had freed my son from the pouch. What I’m trying to point out is how you describe the feeling of seeing your new baby in your hands: It’s like nothing else. I have two more kids in the hospital and it feels like a lot of people are around and everyone is taking care of you. I was very relieved not to live in the midst of all this. It was very exciting and I was very happy. no pain.

When John came to the bathroom to say that the paramedics were on their way, he couldn’t believe the baby was there. He was amazed and I think we were both in a bit of a shock. We wanted to keep Freddie safe and warm. I had a water birth in the hospital before and they quickly wrapped the baby in a cloth, so I said: “Get some towels, let’s keep him warm.”

We knew paramedics were coming, but didn’t know how long they’d be, so we wrapped that up. He was as clean as he came through in the shower – a reasonably clean baby.

It was such a special moment. I never expected to do something like this on my own. In those seconds when I was managing it myself, I wasn’t panicking, but I knew I was in a position where something could go wrong. I didn’t know if there were going to be any complications.

But I remembered what I had planned keeping in mind the pandemic and felt quite accomplished. I could see that nothing was wrong – the baby cried, he was absolutely normal, and it was amazing. I was a little surprised if it was real.

After five to ten minutes the doctor arrived. I didn’t get out of the shower until they arrived, because I didn’t physically know how to get out without accidentally pulling the umbilical cord. So I sat there, holding the baby in the towel until they came in. It all felt like something out of casualty.

When they arrived, they cut the umbilical cord and helped put me to bed with the baby and after a while there were some midwives – I think there were four – who helped with the delivery and a lot of paperwork Of.

“I felt quite accomplished. I could see that nothing was wrong — the baby cried, she was absolutely normal, and it was amazing. I wondered a little if it was real.”

Then we ate chicken for dinner and we saw quadrophenia with the baby – and it felt so weird because it all went back to normal. As the midwives left, we had a normal evening – with just one extra person.

I will say that I found it easy. It’s not easy, but easy, to drink a cup of tea compared to my other two births. I had no interference, so no one was messing with my body. I wasn’t given any medication – not that I don’t agree with it – just that there were no complications.

And I wasn’t in the hospital, which I find quite stressful. I know it has to have bright lights, and busy people, and an intense feeling for it. But in the quiet environment of my home it seemed easier.

Corinne Card is the author of Parenting Tips Your Mother Did Tell You – An Age of Parenting in the Digital Age (£4.99). He was interviewed by Natasha Hind, and his answers were edited for length and clarity.

When is Maryam Nawaz going to London after the order to return her passport? Private TV claimed IV News

Kangana Ranaut In Politics | Kangana Ranaut’s disclosure about her entry in politics, said- ‘I have no intention of contesting elections…’ IV News

Support the team, it will not disappoint, PCB Chairman Ramiz Raja appealed to those criticizing the national team. IV News

The Mangalyaan satellite ended its operation due to battery exhaustion. IV News

What message did the American anchor who committed suicide a few weeks before the wedding leave for her fiancé? IV News