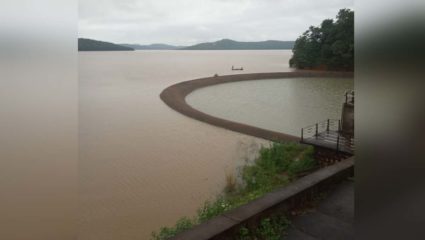 lakhandur, There has been no rain in different areas of the tehsil since the last fortnight. Due to which the crops sown under Kharif have started drying up without water. In this situation, the farmers had demanded to release water from Intiadoh dam for crop irrigation. Under which 600 cusecs of water was released from Etiadoh dam for irrigation on 5th August. Has gone. The above information has been given under the Tiger Etiadoh Department of Lakhandur.

Under the Intiya Doh dam of East Vidarbha, irrigation facility is provided in a total area of ​​17,980 hectares in three districts like Bhandara, Gondia and Gadchiroli. Out of which irrigation facility is available in a total area of ​​4,714 hectares of Lakhandur tehsil of Bhandara district. However, the said facility is made available by leaving water in canals under the dam. . Due to continuous heavy rains, farmers have completed sowing of various crops and transplanting of paddy crops under Kharif. But despite the passage of a fortnight after the sowing and transplanting of crops was completed, due to lack of rain in different areas of the tehsil, the crops started drying up. During this, the farmers of Itiadoh Benefit area had demanded release of water from the dam for crop irrigation.

59.75 percent water storage in the dam

This year there has been insufficient amount of rainfall in the Etiadoh dam area during Kharif. However, due to heavy rains in the dam area in the last few days, only 189.92 dams of water is reported to have been stored in the Itiyadoh dam. However, only 59.75 percent of the above water accumulation in the dam has been reported. Out of which 600 cusecs of water has been released into the canals for irrigation since last August 5.

The government will have a burden of Rs.219 crore to meet the demands of health workers IV news

The knee operation was done with a big cut and the pain is very much. Even after the successful operation, Shoaib Akhtar was...

Vajpayee’s statue got permission as soon as the government changed; The unveiling will be held in Kandivli – Marathi News | Atal...

Hit and run near Jappinamogar: One laborer killed, another injured IV News

Metro trains will start on these two routes in phase-1, know how much the fare will be – Bombay news IV news