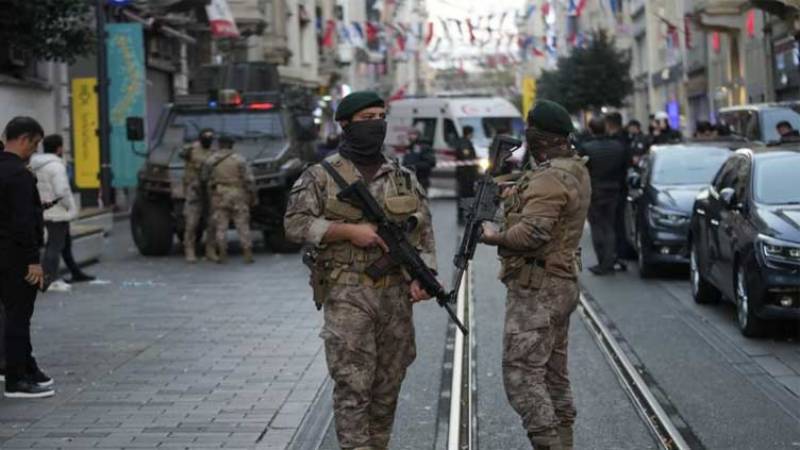 Six people were killed and 53 injured on Sunday when an explosion ripped through a busy pedestrian street in central Istanbul in what Turkish President Tayyip Erdogan called a bomb attack that “smells like terrorism”.

Ambulances rushed to the scene on the crowded Istiklal Avenue, which the police had hastily cordoned off. The area, in the Beyoglu district of Turkey’s largest city, had been packed as usual over the weekend with shoppers, tourists and families.

Video footage obtained by Reuters showed the moment the explosion occurred at 4:13 p.m. (1313 GMT), sending debris into the air and leaving several people lying on the ground, while others fled the scene.

“Efforts to defeat Turkey and the Turkish people through terrorism will fail today as they did yesterday and tomorrow,” Erdogan told a news conference in Istanbul.

“Our people can be sure that the culprits behind the attack will be punished as they deserve,” he said, adding that initial information indicated that “a woman was involved”.

“It would be wrong to say that this is definitely a terrorist attack but the initial development and initial intelligence from my governor is that it smells like terrorism,” he added.

No one has claimed responsibility for the explosion. But Istanbul and other Turkish cities have previously been targeted by Kurdish separatists, Islamist militants and other groups, including in a series of attacks in 2015 and 2016.

Media footage showed people tending to victims after the blast and later white-suited investigators collecting materials from the scene, where pieces of a concrete plant were scattered on the boulevard.

“When I heard the explosion, I was petrified, people froze, looked at each other. Then people started running away. What else can be done,” said Mehmet Akus, 45, a restaurant worker in Istiklal.

“My relatives called me, they know I work in Istiklal. I assured them,” he told Reuters.

A helicopter flew above the scene and a number of ambulances were parked in nearby Taksim Square. The Turkish Red Crescent said blood was being transferred to a nearby hospital.

If confirmed, it would be the first major bomb in Istanbul in several years.

Twin bombings outside an Istanbul soccer stadium in December 2016 killed 38 people and wounded 155 in an attack claimed by a militant from the militant Kurdistan Workers’ Party (PKK).

Condemnation of the attack and condolences to the victims came from several countries, including Greece, Egypt, Ukraine, Azerbaijan and Pakistan.

European Council President Charles Michel said on Twitter that he had sent his condolences to the victims after the “terrible news”.