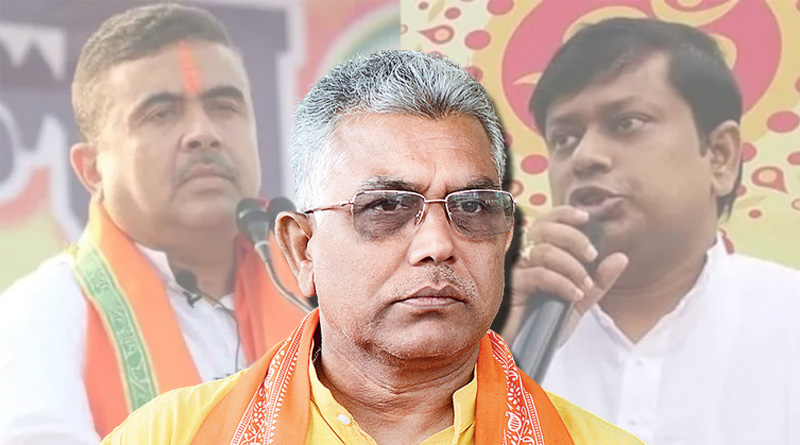 News Daily Bureau: “Their wishes have been fulfilled. I am not in charge of Bengal. Now show the party victory. Get 40 percent of the vote. ” Dilip Ghosh, the former state president of the BJP, opened fire on Sukant-Shuvendu without naming him. Not only that, he slammed his critics within the party and said on Friday, “If I get 40 percent of the vote, I will accept their word. If not, I think they have set the Trinamool (TMC) to damage the BJP. The rise of the BJP has hurt the Trinamool-CPM as well as many people in our party. ”

The electoral rise of Bengal BJP in his hands, he is being sent to another state by joining the Bengal organization. With Dilip Ghosh, the practice in Banga BJP is in full swing. A section of the party claimed that some leaders of the ruling party were behind the move. Dilip Ghosh has made one explosive comment after another by attacking his opposition camp in the party without naming anyone in the news. In this situation, MP Locket Chatterjee is beside Dilip Ghosh. Lockett said, “Dilip Ghosh is the leader of Bengal, he will stay in Bengal. The team also gave me the responsibility of Uttarakhand. Similarly, Dilip Ghosh has been given the responsibility of empowering booths in eight states. It is a matter of our pride. When that work is done, Dilipada will go around in the same way as he goes around Bengal. ”

In Bengal, Dilip questioned the original leaders of the BJP and fired cannons against the new and the then. Aiming at Shuvendu Adhikari without naming him, he also questioned the experience of Sukant Majumdar. Dilip Shibir claims that the former state president has become the eyesore of the current ruling Shibir by speaking on behalf of the old leaders of the party. On Thursday, Dilip made it clear that he was not going anywhere, he was in Bengal. His remarks have been the subject of much debate. Many within the BJP have criticized him for speaking so bluntly. Many in the ruling BJP camp in Bengal have even complained to the central leadership in Delhi in his name.

Dilip’s response in that context, he fights with his chest tight, eye to eye. Those who think that he will change as soon as someone says, they can change that idea. The party’s all-India vice-president claimed, “If I had been wrong, the party would not have moved forward.” Dilip Ghosh, without naming the critics who criticized him or many other new leaders, said that those people have no qualifications. I don’t care about them. I do not take the name in my mouth. What have they given to the party? The BJP’s all-India president JP Nadda is coming to the state amidst the turbulent situation of the BJP. Nadda will be at the executive meeting in Kolkata on June 7. He is scheduled to return to the kingdom on June 6.

Rupee Fall: The rupee is falling day by day.. its effect is on us.. do you know why this is actually happening..? IV News

Rains begin in most parts of the country from today: Meteorological Department IV News

On the special directive of Punjab Chief Minister Hamza Shahbaz, the minimum wage was increased by Rs 5,000 IV News

Big announcement of railways, the duration of Kolkata-Delhi train journey is going to be reduced IV news

Center asks states, UTs to screen 2% of passengers on each incoming flight through RT-PCR IV News

The Chief Minister of the Indian state of Maharashtra, Adu Thackeray, has resigned IV News