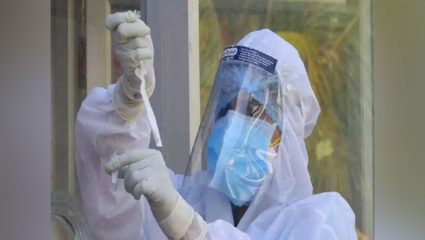 New Delhi. In India, after 2,487 people were found infected with the corona virus in a day, the total number of epidemic cases increased to 4,31,21,599, while the number of patients under treatment has come down to 17,692. According to the updated data of the Union Health Ministry till 8 am on Sunday, the death toll in the country reached 5,24,214 after 13 more patients died from Kovid-19.

The number of patients under treatment is 0.04 percent of the total cases of infection, while the national rate of recovery from Kovid-19 was recorded at 98.74 percent. According to the data, a decrease of 404 cases was registered in the number of patients under treatment for Kovid-19 in the last 24 hours. The daily rate of infection was recorded at 0.61 percent and the weekly infection rate was 0.62 percent.

According to the ministry, the number of patients who have recovered from this disease so far has gone up to 4,25,79,693 while the death rate is 1.22 percent. Under the nationwide anti-COVID-19 vaccination campaign, 191.32 crore doses have been given so far.

Hindi Ki Sabji | Don’t forget to eat these things after eating lady’s finger, otherwise it can be a big problem. IV News

What should be the age difference between husband and wife? What research says – Uttarbanga Sambad IV news

Hindi Ki Sabji | Don’t forget to eat these things after eating lady’s finger, otherwise it can be a big problem. IV News