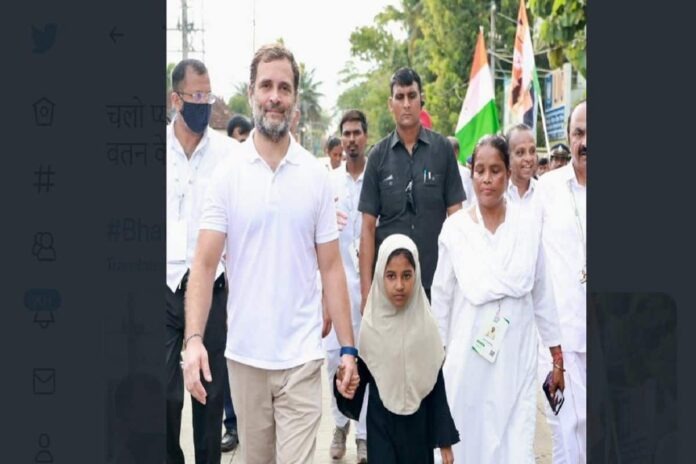 Puber’s pen, webdesk: Congress leader Rahul Gandhi walked with a hijab-wearing Muslim girl in the program of ‘Bharat Joro Yatra’. BJP spokesperson Sambit Patra tweeted sarcastically around this picture and Congress also responded to him. Sharing Rahul’s photo on his Twitter handle, Sambit wrote, ‘When votes are ‘counted’ on the basis of religion… it’s called Toshan.

The Congress leader wants to strengthen the Muslim vote bank by walking next to a Muslim girl.

Congress has responded to this criticism of BJP. Thiruvananthapuram MP Shashi Tharoor, who is one of the contenders for the post of Congress president, praised the picture of Rahul, saying that Rahul’s behavior towards a child is very beautiful. He wrote on Twitter, “The girl is small”. And he is too late to be a part of the vote bank. Please free him from your narrow mindedness. What Rahul has done is simple behavior towards a child. Let BJP learn to see him beyond people’s beliefs. That’s what we do.’

Congress is conducting ‘Bharat Joro Yatra’ in 12 states of the country. A few days ago, Rahul said, this journey is not only a political program. This journey is personal to him.

His purpose of participating in this journey is to understand himself and this ‘beautiful’ country better. And its reflection was seen in the new film.

Congress spokesperson Supriya Srinath said to Sambit Patra in a scolding tone, “I have never seen such a low-minded person like you in my entire life. You spare at least one child. I understand that your head is spinning after seeing the huge crowd on the Bharat Joro Yatra. So you are immersed in the politics of hate. Jairam Ramesh re-tweeted it again.

Congress leader Pawan Khera said, dividing people on the basis of clothes, they can never be patriots, are actually Modi-bhakts. We have found the dividers of India so far. Swaraj Party founder Yogendra Yadav posted a collage of the march led by Rahul Gandhi. Wrote glasses for people with poor vision to see better. It is noted that Rahul Gandhi started his 150-day Bharat Joro journey from Kanyakumari.