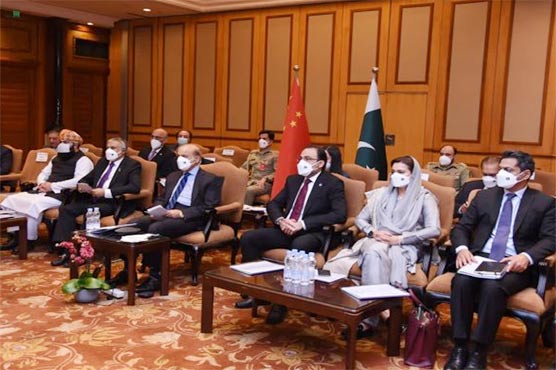 BEIJING: (Web Desk) On the invitation of Prime Minister Muhammad Shahbaz Sharif, Chinese companies expressed deep interest in investing in joint ventures in Pakistan, especially in solar energy and infrastructure projects, and in other major projects including provision of clean drinking water in Karachi. Investment has been assured, Prime Minister Shehbaz Sharif has invited leading Chinese companies to visit Pakistan.
The Prime Minister has offered the Chinese companies to work together on the 10,000 MW solar energy project and has insisted the companies working in Balochistan to speed up the work on the Gwadar airport and complete the project this year. The company assured Prime Minister Shehbaz Sharif that the construction of Gwadar Airport would be completed early next year.
Prime Minister Shahbaz Sharif, while talking to the delegation of Chinese companies, said that he is aware that there have been many problems in the past for which he is apologetic. Rs.50 billion has been paid yesterday and Rs.50 billion has been made into a revolving fund.
Shahbaz Sharif said that on the direction of Finance Minister Ishaq Dar, the State Bank has created a revolving account, with the payments, another 50 billion rupees will be added to it. Diamar Bhasha will solve the problems of land acquisition in the project, there is great sadness and regret over the deaths of Chinese brothers and sisters, the criminals have been arrested, they will get exemplary punishment.
He said that the best security measures are being taken for the Chinese people, those working on CPEC and other projects will ensure the safety of the Chinese people.
The Prime Minister said why some problems related to Mohmand Dam have arisen? We will find out and solve these problems. Water supply is a big problem in the city of Karachi of two million people. We are ready to work together with you along with the Sindh government to generate 10,000 megawatts of electricity from solar energy. A comprehensive plan has been made, I invite investment in wind power generation projects as well, by reducing the cost of fuel, oil and gas heavy foreign exchange will be saved.
Shahbaz Sharif further said that he will work with Chinese companies so that the relations between the two countries can develop, thanking him for showing interest in ML One and other projects.