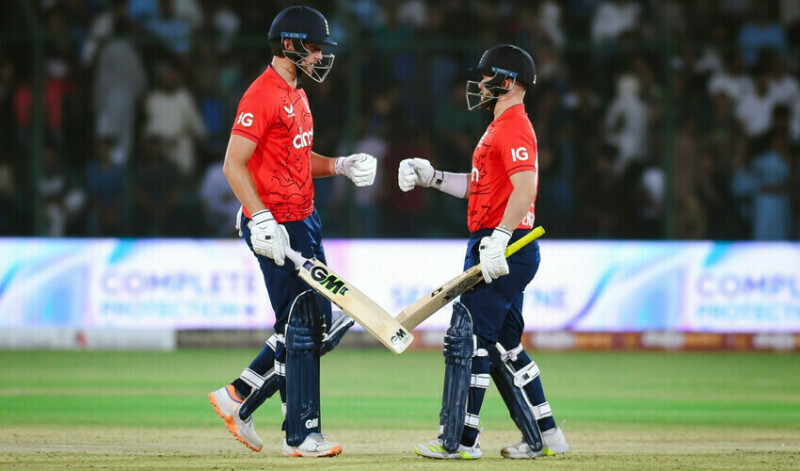 In the third T20 match, England defeated Pakistan by 63 runs and took a 2-1 lead.

England had given Pakistan a mountain-like target of 222 runs, in pursuit of which the Pakistani team could score 158 runs for the loss of 8 wickets in 20 overs.

Batting first, England scored 221 runs for the loss of 3 wickets in 20 overs. Pakistan won the toss and invited England to bat first.

England’s Ben Duckett played a brilliant innings of 70 and Harry Brooke scored 81 not out.

The English batsmen hit the Pakistani bowlers with 27 fours and 6 sixes.

Usman Qadir dismissed two and Mohammad Hasnain dismissed one. Shahnawaz Durmani proved to be Pakistan’s most expensive bowler as he conceded 62 runs in 4 overs without taking any wickets.

The match between the two teams was played at the National Stadium, Karachi, in the first match of the seven-match series, Pakistan was defeated by England, while the second match was won by Pakistan.

A seat in the VIP gallery was reserved for President Arif Alvi and his family.

Strict security arrangements were made for the arrival of the President at the stadium.

Winter knocks in the highlands, light snowfall on the mountains IV News

Jhulan Goswami: Hope I am able to contribute to the growth of women’s cricket in India and the world IV News

Winter knocks in the highlands, light snowfall on the mountains IV News