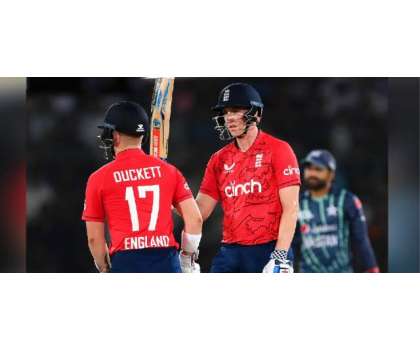 Mohammad Hasnain caught full salt by Mohammad Nawaz, who scored 8 runs.
Jaques and David Mullan brought England’s score to 61 runs, but Usman Qadir gave Pakistan the second wicket. David Mullan had scored 14 runs off 15 balls, including 2 fours, before Hyder Ali was caught. Usman Qadir, who scored 40 runs in 22 balls in an aggressive manner, was caught out by Muhammad Nawaz in the 9th over.
Ben Duckett and Harry Brooks batting aggressively did not give the Pakistani bowlers a chance to take wickets.

A long and unbeaten partnership of 139 runs on 69 balls was established between the two batsmen and both completed their half-centuries. Harry Brooks scored 81 runs off just 35 balls with the help of 8 fours and 5 sixes. Ben Duquette played an innings of 69 runs in 42 balls with the help of 8 fours and a six. On behalf of Pakistan Usman Qadir got 2 wickets and Mohammad Hasnain got one wicket.
Chasing the target, captain Babar Azam scored only 8 runs out of 17 runs in the third over due to a good catch by Topley on the boundary. Mohammad Rizwan also scored 8 runs in 14 balls and was bowled by Topli’s ball. Hyder Ali scored only 3 runs and was caught by Moin Ali on the ball of Adil Rashid. Iftikhar Ahmed’s innings was also limited to 6 runs. Shan Masood and Khushdil Shah took the score forward in partnership for the fifth wicket, but Khushdil Shah got out after scoring 29 runs off 21 balls while trying to play a high shot.
Shan Masood took the score forward with Mohammad Nawaz and also completed his first half-century in T20. Pakistan team scored 158 runs for 8 wickets in the allotted overs. England won the match by 63 runs defending 221 runs. Pakistan has not made any changes in the team while England has made three changes in the team. Will Jacques replaces Alex Hales, Mark Wood replaces Luke Wood and Reece Topley replaces David Whaley.
Babar Azam, the captain who won the toss, said that the pitch is looking good on which a target of 150 to 180 runs can be achieved, it is not easy to play two consecutive matches. English captain Moeen Ali said that he used to bowl after winning the toss, but now he has to give a big target while batting first and Pakistan has to get quick wickets. It should be noted that Pakistan defeated England by 10 wickets in the second T20 yesterday and leveled the seven-match series at 1-1.
Pakistan XI consists of captain Babar Azam, Muhammad Rizwan, Haider Ali, Shan Masood, Iftikhar Ahmed, Khushdil Shah, Muhammad Nawaz, Usman Qadir, Haris Rauf, Shahnawaz Dhani, Muhammad Hasnain while England XI consists of Will Jacques, wicketkeeper Phil Salt, David Mullan, Ben Duckett, Harry Brook, captain Moeen Ali, Sam Curran, Rhys Topley, Adil Rashid, Mark Wood, Liam Dawson are included.